This page is a translated version of the page Le biofiltre and the translation is 96% complete. 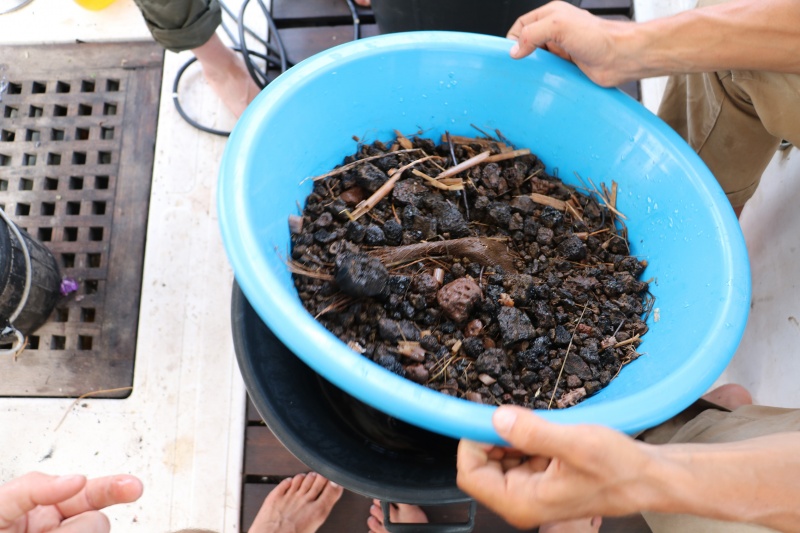 How to make organic fertiliser that can be directly absorbed by plants by combining a biofilter with worm compost.

How to make organic fertiliser that can be directly absorbed by plants by combining a biofilter with worm compost.

Worm composting works by breaking down organic waste using earthworms (notably Eisenia Fetida) which mimics the process performed by living organisms in the surface layer of the soil. Food waste (vegetable peelings, scraps of food, even animal carcasses, faeces etc.) is a source of nourishment which is eaten and digested by micro-organisms (bacteria and fungi) and earthworms in the worm compost.This process of digestion promotes mineralisation of waste products, converting them into simple elements (azote, potassium, phosphorus, magnesium, calcium, iron , trace elements etc.) which can then be absorbed by plants, giving them essential nutrients for their growth and development

The end-products of this process are leachate (or ‘brown liquid’ from compost) and ‘worm tea’ from humus.

Leachate (brown liquid) is rich in nutrients, beneficial micro-organisms and organic molecules yet to be broken down and is made up of liquid earthworm faeces, moisture from compost and fresh plant matter which has fallen from above.

Humus (a dark, lumpy substance that feels moist to touch) contains essential minerals for plants, humic acid (the molecule which stimulates their metabolism and root growth) and decomposers in the form of beneficial micro-organisms. It effectively acts as a larder as it stores nutrients to which plants have a progressive and continuous supply.

The way this works is that decomposers effectively finish off the process of “digesting” chemical compounds which are then readily and directly accessible to the plant. In healthy soil, this is a continuous process.

The liquid which comes from out of the biofilter contains beneficial micro-organisms and elements which can be easily absorbed by plants. The benefits of this process taking place in a biofilter is that it prevents the plant roots from rotting and resulting in decay or deficiencies. An aerobic process takes place in the biofilter i.e. in the presence of oxygen.

The biofilter uses an active flow of liquid (water + organic matter) which acts as an ‘oxygenating fountain’ by cascading onto beds which are made of microporous and aerated material such as volcanic rock, pumice stone or expanded clay balls and beds made of aerated materials high in cellulose such as straw, dried grass, dried reeds etc. suitable for the growth of fungi.

Why combine worm compost with and a biofilter?

The Leachate (or brown liquid) that is collected after composting is a substance that has not entirely been broken down. Adding a biofilter to the worm compost allows completion of the process which produces the different nutrients needed by the plant . You then end up with a “fertiliser” which can be used even on an inert substrate (as with soil-less cultivation or hydroponics) which in turn brings beneficial micro-organisms into the system.

Humus can be harvested either by hand-sorting or waiting until the earthworms have migrated. It then can be used to enrich soil or potting substrates. This system works by the earthworms building their colony in the upper section (approximately in the first 15 centimetres) with the humus that has been produced remaining in the lower section and the leachate draining into the biofilter which then becomes enriched with nutrients as it passes through the humus. This type of worm composter is mostly used for collecting leachate.

There are varying scales of worm composting: from large scale operations for spreading on crops to making it on much smaller, domestic scale e.g. for making fertiliser for personal use to grow plants either with or without soil. The real benefits can be seen both in isolated areas where there is farming activity or even in urban areas where crops are grown out of the soil (e.g. on rooftops) a virtuous feeding cycle can be established by combining the processes of recycling organic waste with producing fertiliser for plants.

In this tutorial, you will learn ways in which can make your own worm compost (approximately 50L for each of the biofilter and worm composting systems).

There are, of course, alternative ways it can be made using different ratios and other materials, but this one is thought to be the one which can be achieved successfully by most people and can be adapted to suit local conditions. 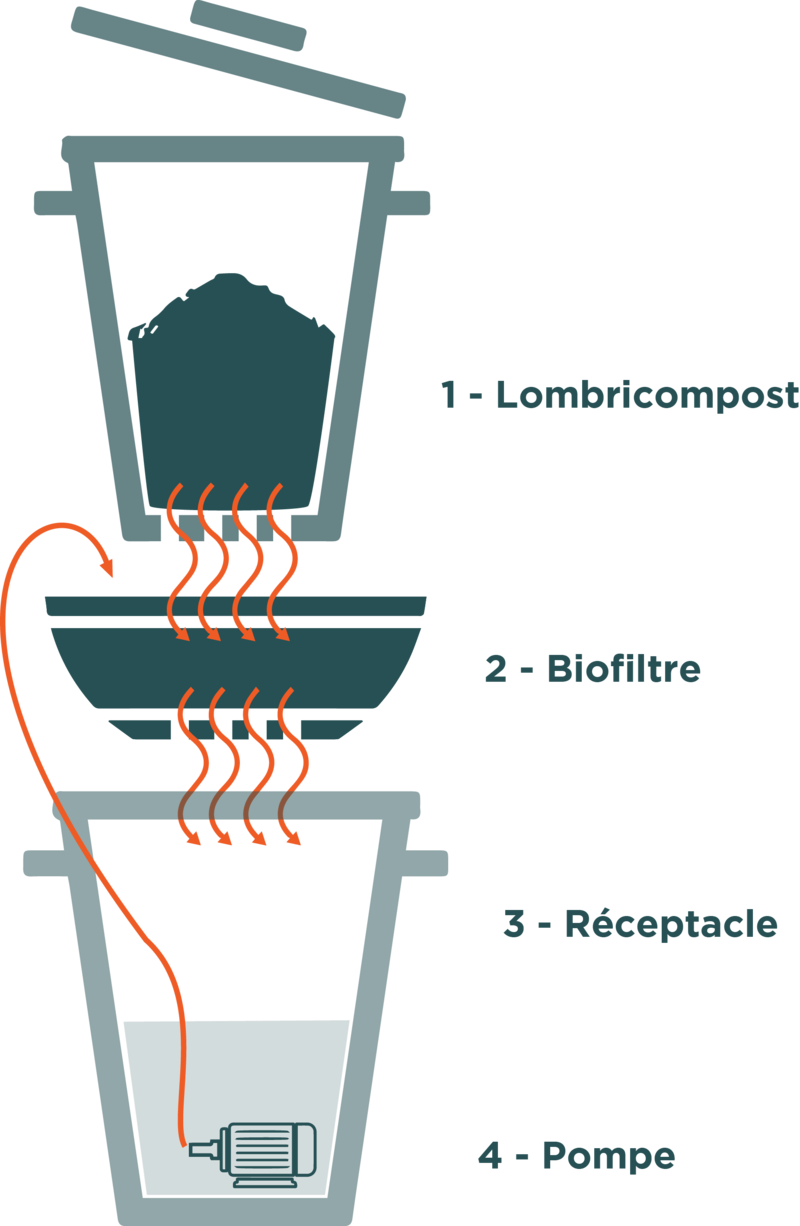 Place the container on top of the bowl (biofilter)

3) Fill the worm compost with the following:

1st layer: porous rocks (base layer- made of bedding material suitable for drainage) and straw (this first layer is for earthworm reproduction).

4) Cover the worm composter with a lid.

1) Drill a hole the same diameter as your hose in the centre of your bowl.

2) Drill smaller holes in the bottom of the bowl.This allows the liquid to flow from the bowl to the container.

3) Place the bowl over the container.

4) Feed the pipe through the hole in the bowl and check that the pump is still submerged under the water at the bottom of the container.

5) Fill the bowl with the straw, porous rocks and fungi. (You can buy these from GHE - General Hydroponics Europe, 10g per 10L or approximately 2 teaspoons).

Note: You can also use rotting organic matter.Decomposers (micro-organisms) can be found under rotting branches and can be recognised by a film of whitish mould.

6) Putting a piece of open-weave canvas on the end of the pipe allows the water to circulate in the pipe without having to bypass the rock or the straw.

1) Connect the pump to the hose.

2) Place it right at the back of the second 60L container.

Caution: In order to retain the cascading effect from the biofilter, the liquid in the container should not exceed the 40L level. To avoid damage to the pump through turning it on without water, do not fill under the 10L level.

Step 5 - Directions for Use

Then cover with a bed of 1cm (approx.) of straw. This is used as a shelter for the worms and is an area where they can reproduce before the next application.

- Temperature and humidity should be sufficiently high: worm compost should stay moist - even pour a small amount of water over it if necessary. Don’t hesitate to throw in the remains from your teapot or coffee-maker (worms love caffeine!). Water (without added salt) from boiled rice can also be a treat for earthworms.

- PH value must be more or less neutral: The PH value of all the different foods added must be evened out (e.g. avoid only pasta) 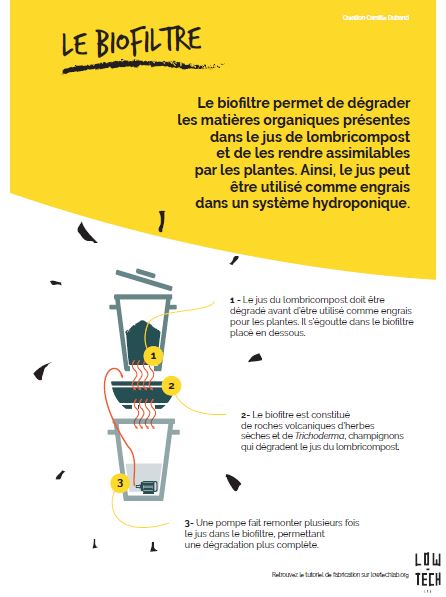 This biofilter was conceived with the help of Thomas Blanguille, Hydroponics Expert.

This English translation has been possible thanks to the PerMondo project: Free translation of website and documents for non-profit organisations. A project managed by Mondo Agit. Translator: Gill Barringer. (Whilst great efforts have been made to ensure the quality of this translation, the translator makes no guarantees and will accept no liability for any claims made against her in the event of any misinterpretation, errors or omissions thereof)

Please share the tutorial and give feedback, or add any comments that may be helpful for making any improvements.