The how to of how to's

This page is a translated version of the page Le Tuto des Tutos and the translation is 100% complete.

A low-tech can be an outcome from traditionnal or modern know-hows. It founds its utility in towns, just as well as in the countryside. It can make part of rich and industrialized environments, or in developing countries.

We advise you to think about its questions, spread out in three main themes : the need, the accessibility and the respect, in order to know if your project is truly a low-tech.

ACCESSIBILITY Is it accessible from financial, technic, and materials point of view ? Is its realization cost affordable for this kind of need ? Does it calls on an artisanal know-how ? Are the ressources, materials and tools, locals or easily available in markets, fablabs or rubbish dump ?

RESPECT Does it respects environment ? Is it energy-friendly, fixable, or an outcome of recycling ? Does it respects local populations ? Is it appropriate with local way of life and culture ?

BE CAREFUL ! Avoid to submit a polluting dispositive. Avoid to promote a specific product or material that would not be open-source. 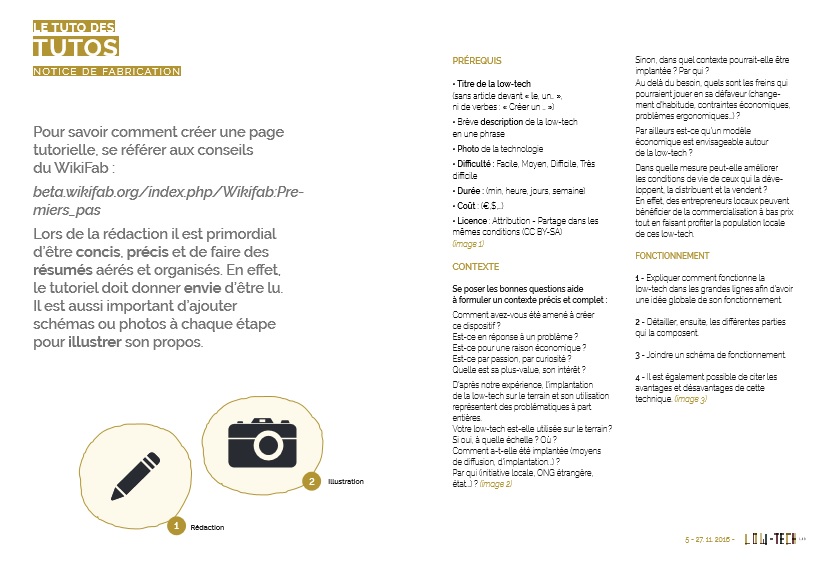 To ask yourself right questions helps to formulate a precise and complete context : How have you been creating this device ? Was it to answer a problem ? Was it for an economic reason ? Was it for a hobby, or to fullfill your curiosity ? What is its added value, its interest ? According to our experience, the integration of the low-tech of the field represents a real problematic. Is your low-tech used on the field ? If yes, how big ? Where ? How has it been integrated (sharing means, integration ways, etc.) ? By who (local initiative, foreign NGO, state, etc.) ? (image 2) Otherwise, how could it be implemented ? By who ? Beyond the necessity, what are the obstacles that could disfavor it (changing in the habits, economic constraints, ergonomic problematics, etc.) ? Furthermore, is a business model possible around the low-tech ? In which way could it improve the life of the ones developing it, dealing it, selling it ? Indeed, local entrepreneurs can beneficiate of low cost commercialization, making local population profit of these low-techs in the same time.

1 - Explain how is working the low-tech in the high lines, in order to get a global idea of its functioning. 2 - Detail, then, the different parts composing it. 3 - Join a functioning schematic 4 - It is also possible to cite pros and cons of this technique. (image 3)

List fabrication steps in the form of a summary.

List precisely the material, expliciting dimensions (distances, volumes, etc.) if needed. Present, if possible, alternatives in the choice of materials.

Put a light and clear title to every steps. List sub-steps as you do for a cooking receipe. A sub-step represents an action.

DIRECTIONS FOR USE & REMARKS

Add remarks, directives of use, of fabrication.

Share sources in order to let the readers look for additionnal informations.

Example of a step by step how to correctly realized on the Lab' : http://lab.lowtechlab.org/index.php?title=L%27%C3%A9olienne (So far in French) 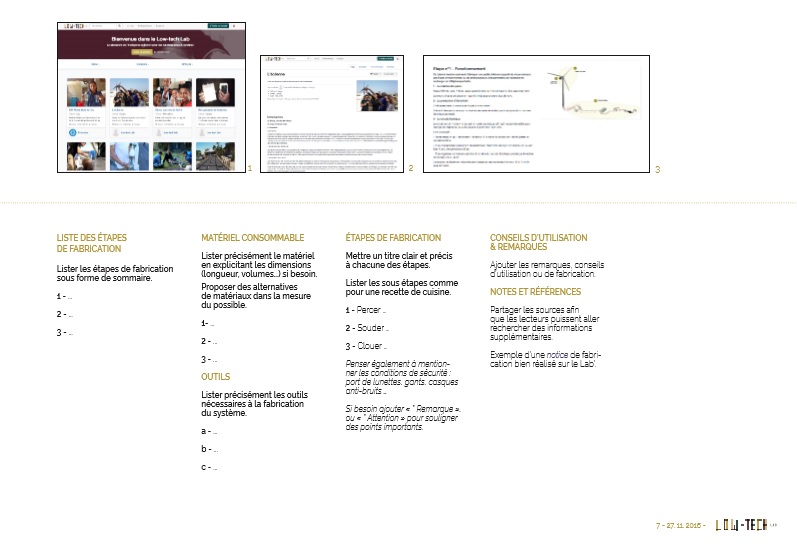 A camera, a microphone, SD cards, batteries, a tripod. Check before use the state of your tools : SD card with sufficient disk space, battery charged, etc.

2 - Location of the movie

Choose where does the action takes place, in order to have a good sound quality and good luminosity:

- Indoor, beware of the lack of light and artificial lights, that will impact your video quality. Think of fridges, clocks as well, that could create parasite sounds. These will be disappointing for the spectator watching your video.

- Outdoor, beware of backlighting and the lack of light. Concerning the sound, the wind is fatal. Protect your microphone and its exposure !

- Be careful that no big light pits are in your field of view.

- Avoid too big spaces, the backplane should rather be short.

- Filming during the day is highly recommended. At night, you'll get granulas on your images.

3 - Positionning of the camera

In order to know where to place the camera, ask the actor what he's going to do at each step. It is therefore easy to place the camera without being annoyed with his hands. On the workbench should only be present the material used at the precise step. This permits not to be visually polluted.

Film one scene per step, if possible.

- Vary short and large scenes to air the video.

- For explicative scenes (explanation of a step, of the context), prefer large scenes.

- It is highly recommended to film two frames per action.

- Head to foot framings are not recommended, prefer middle range frames or short frames. - When someone is speaking, do not "cut his head off" during framing. Let an empty space above him.

- Avoid to place the person right in the center of the frame. Putting him on the side will bring dynamism to your scene.

- Filming static scenes is highly recommended to avoir any shaking.

- Put the camera on a tripod or on something static.

For the focus, check whether the camera is on automatic or manual mode.

- If it is on automatic, well check that the camera is focusing on the action and not on the person head.

- If it is on manual, set the focus on the action before starting to film.

""Example"": "Here, I'm going to melt the white wire on the + pole...". We need here a close plane, we focus on the object to melt, and we check that our hands are not between the object and the camera when we film. ""Be careful"" : For tutos realized with smartphones, the difficulty is to realize static scenes. Put the phone on a stable, static place during the whole sequence.

6 - Filming in order to edit the video

- Don't tell yourself that mistakes can be rectified at video editing.

- Avoid to film in black and white or vertically.

- Launching the video recordings, let a dead time before action starts or discussion begins in order to facilitate video editing.

- Make simple rushes for get an easy video edition.

The video content will tighly be linked to the written step by step.

- Present the low-tech and its economical, environmental, social or other interests.

- Present an issue solved by the low-tech (problematic and solution)

- Do not hesitate to start from a larger context to a local one, or even personal one.

- It is important to choose with the speaker, what is going to be said. Le scene will be explicative, so prefer a large frame scene.

- Add cut-scenes (action) for this part don't be only a monolog in front of the camera. Think as well to make action scenes "on the field", that will be in concordance with the context.

Ask yourself which kind of video is preferable to realize. Notably when speaking of explanations : will they be voice-overed, lived, or subtitled ?

- Beware of hands between the camera and the action.

- Always keep in mind that everyone has to understand the action. For this, it can be interesting to explain : "I'm doing this action for this reason, with this material that I got at this place ..."

- Do not forget to mention safety intructions.

"Dissect the fabrication in several key-steps:"

- The material : materials and tools necessary for the fabrication

- The fabrication : dissect every step, one scene for one action, and explain them precisely, speaking loud and articulating.

- The use : scenes on its situation.

- Advices : It is possible to finish the video giving some advices. 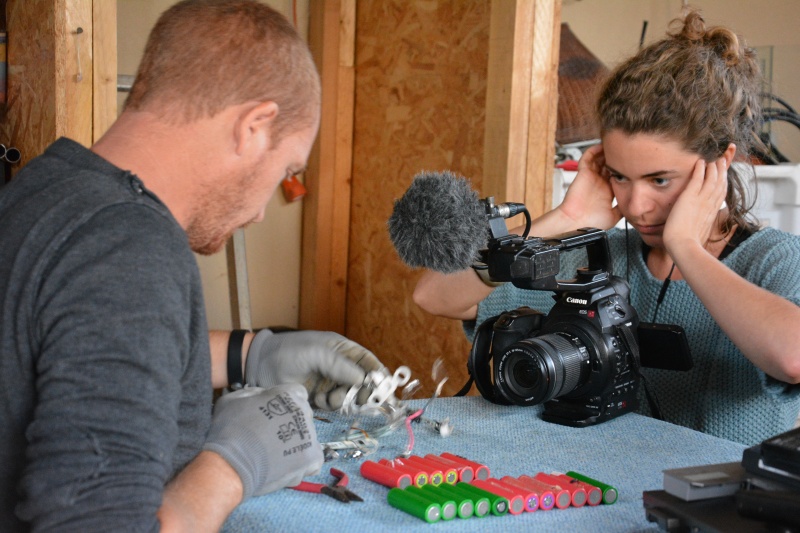 Once the scenes are filmed, they need to be sorted and stored. In a folder, cut-paste the SD card files and watch the rushes one by one.

As it's highly recommended to realize short videos, cut every gaps. This will allow as well to get more dynamism. In a second time, ajust luminosity : - Outdoors, the light can be very strong. - Indoors, the picture can take a yellow tint, because of lighting systems. Adjust tones.

Think about including cut scenes : emergency scenes made to be placed between explicative scene, to get a more dynamic film. With these softwares, it is possible to cut the image while keeping the sound, in order to have an illustrative scene with a voice-over. 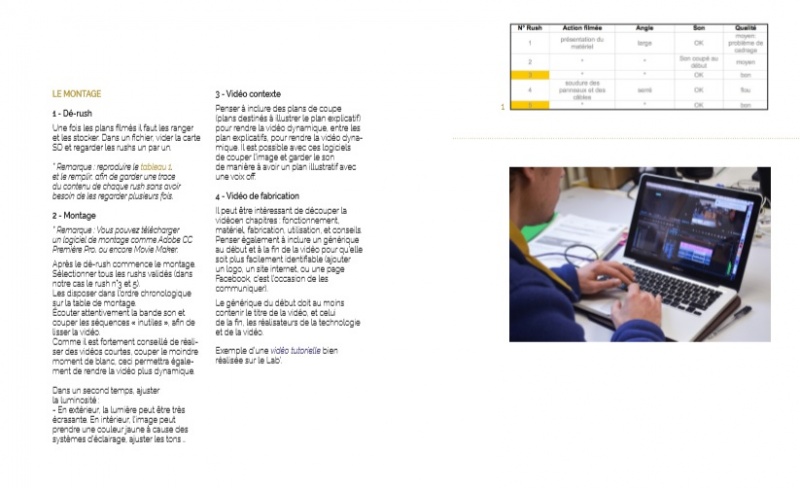 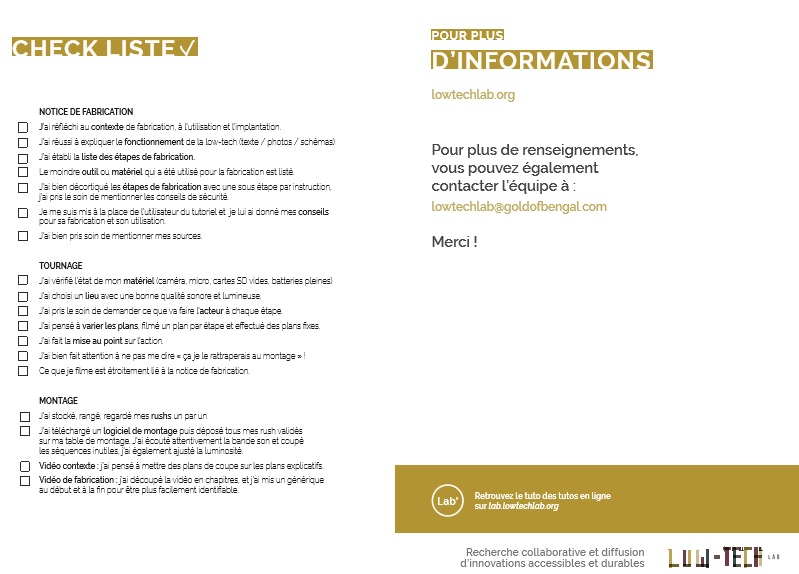