This page is a translated version of the page Récupération de batteries and the translation is 98% complete.
Outdated translations are marked like this. 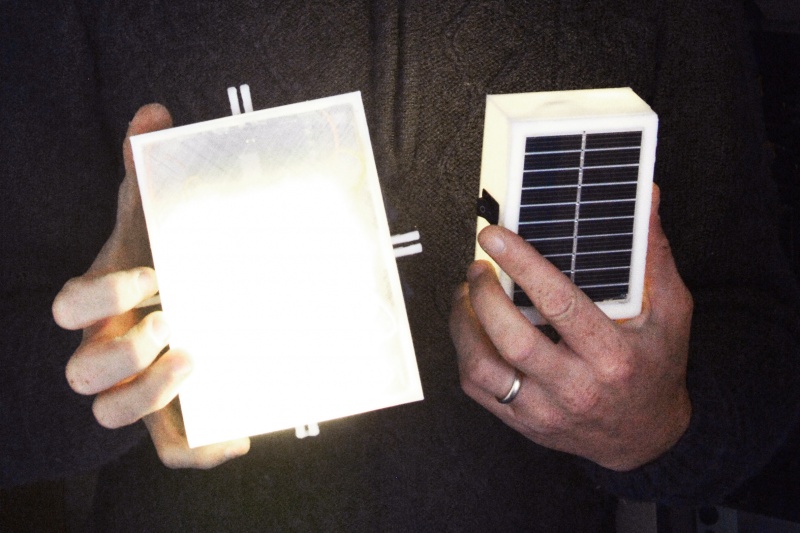 Lithium is a natural ressource which is increasingly used in car batteries, phones and computers. This resource is gradually depleting. Its intensive use in batteries is mainly due to its capacity to store more energy than nickel and cadmium. As the replacement of electrical equipments and electronic devices is accelerating, these equipments become an increasingly significant source of waste (WEEE : Waste electrical and electronic equipment). At the present time, France produces 14 to 24 kg (30 to 52 pounds) of electronic waste per inhabitant per year. This rate increases by about 4% every year. In 2009, only 32% of young (18 to 34 years old) French have recycled their electronic waste. The same year, according to Eco-systèmes (https://www.ecosystem.eco), recycling 193 000 tons of WEEE between january and september would have avoided the emission of 113 000 tons of CO2.

Yet, these electronic waste have great recycling potential. One way is to reuse the lithium contained in computer battery cells. When a battery stops working, it means that one or several cells are defective but the other cells are still in working condition and therefore reusable.

We can create a separate battery from these working cells, and use it to power an electric drill, recharge a cellphone, or connect it to a solar panel and power a lamp. By connecting several cells together it is also possible to create batteries for bigger devices. 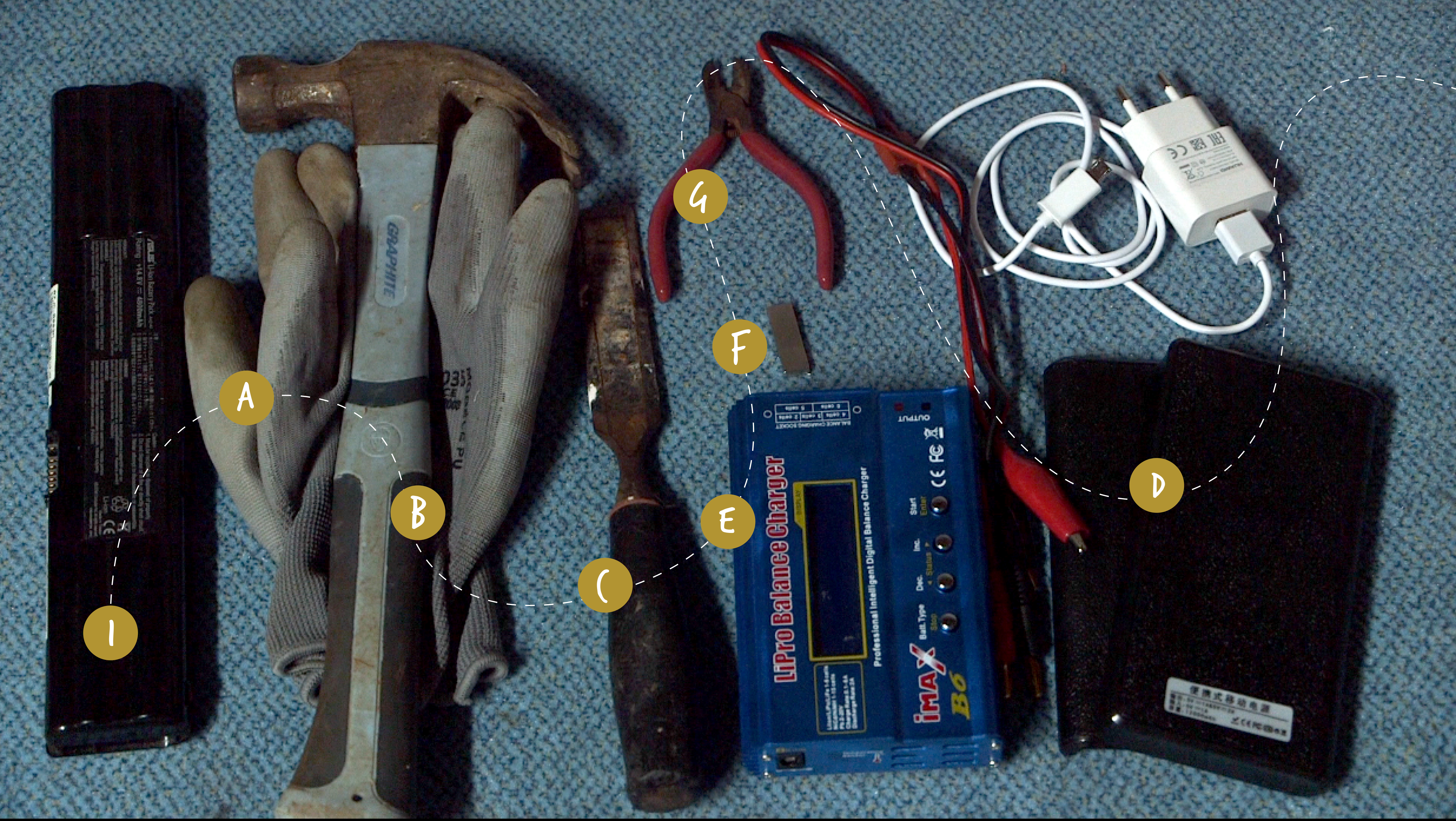 7 - Box (cardboard, wood, 3D printed...) with 2 openings to fit the solar panel and the light diffuser (plan to also fit the light switch and USB output)

For extracting the battery cells :

For making the lamp :

This tutorial shows how to recover the battery cells from a computer in order to create a new battery. Powered by a solar panel or by a USB port, it will allow you to light a LED lamp.

The system works around three modules:

The photovoltaic panel concentrates the energy of the sun. It allows to recover its energy in order to store it in the battery. But be careful, the amount of energy received by the panel is irregular depending on the time of day, the weather... It is important to install a charge/discharge regulator between the panel and the battery to protect it against overload, among other things.

It is made of two lithium cells recovered from a computer. To put it in a nutshell, a battery is a bit like a box containing several batteries: each of them is a cell, a unit that supplies power to the device by electrochemical reaction.

The module that gives back the energy: the LED lamp and its voltage regulator

Our batterie delivers a 3.7V current and our LED lamps work with 12V. So we need to transform the cell's energy from 3.7V to 12V : thanks to the voltage regulator called DC/DC booster.

A small screw on this module allows to regulate voltage. You can set it to 12V - or another voltage according to your LED's characteristics. 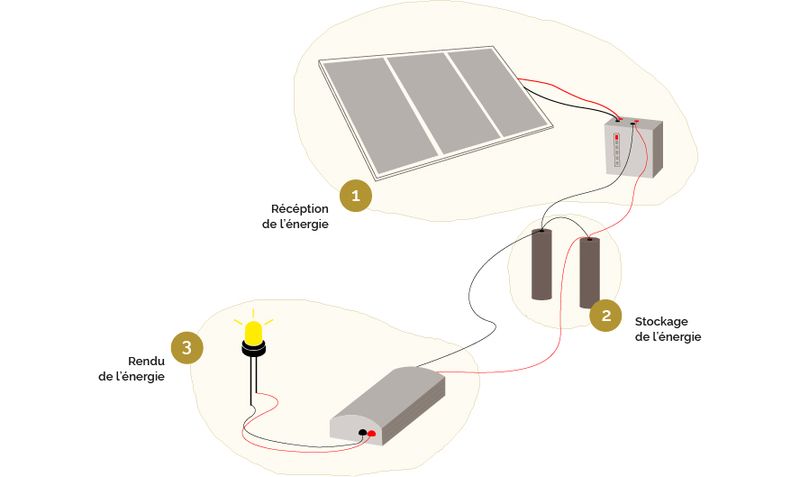 1) Removing the cells from the computer battery

6) Fitting the modules in the box

Step 3 - Removing the cells from the computer battery

1) Put on gloves to protect your hands

2) Fix the battery on an vice, and open it with a hammer and a chisel. (image 1)

3) Isolate each cell : remove every other parts around the cells with a wire cutter (image 2)

4) Using a voltmeter (see settings on the schema), measure the cells voltage to find out which are reusable.

Note : All cells below 1V are not reusable.

Caution: If any cells have leaked (visible on the outside of the computer's battery), do not dismantle them. Lithium is toxic in high doses. 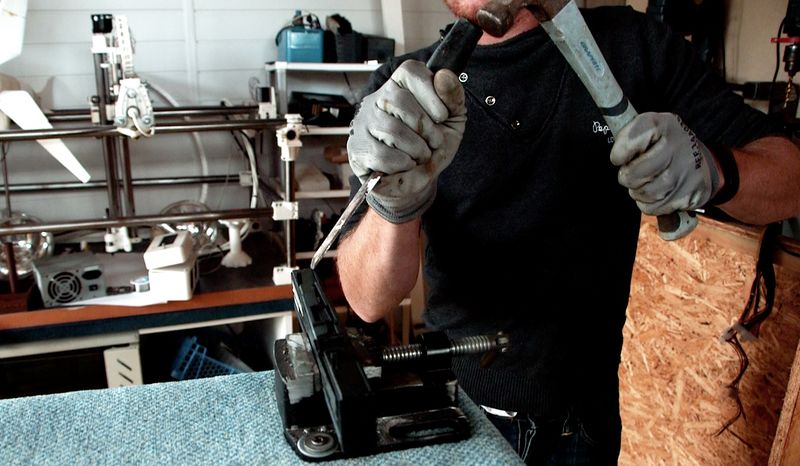 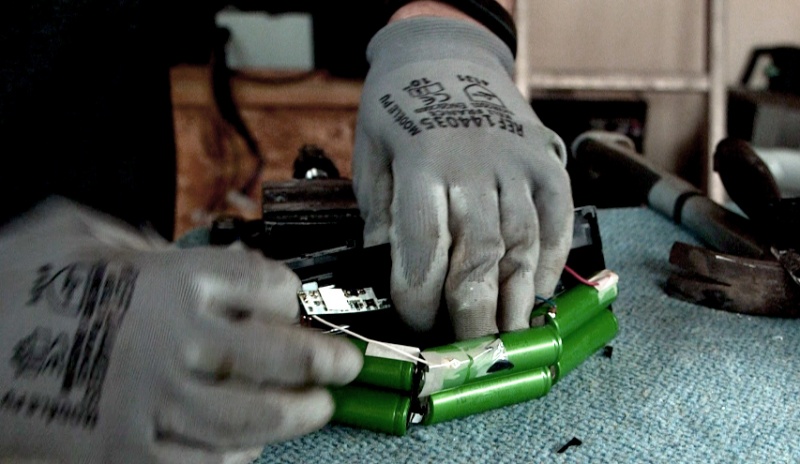 To measure the capacity of a cell, we have to charge it to the maximum and then discharge it. Those cells are lithium based, and lithium needs to be charged and discharged properly. Usually the maximum charge is 4,2 V and the minimum is 3V. Going over those limits will damage the cells.

1) Use a PowerBank : it allows you to charge many cells at once with a USB port.

2) Charge the cells and wait until the charge is complete (all the lights should be on), it will be done in about 24 hours. (image 3)

The cells are charged at their maximum (4,2V), now we have to discharge them.

3) Use an Imax B6 : a tool that allows to discharge the cells one by one and calculate their energy delivering capacity.

5) Connect the neodymium magnets to the crocodile clips, then connect to the cells, the magnet allow the current to pass between the Imax B6 and the cells. (image 4)

7) Discharge the cells until they are completely empty.

8) Note the capacity on the cell. The higher the better.

Note : It is important to do homogeneous batteries, with cells that have a similar capacity. 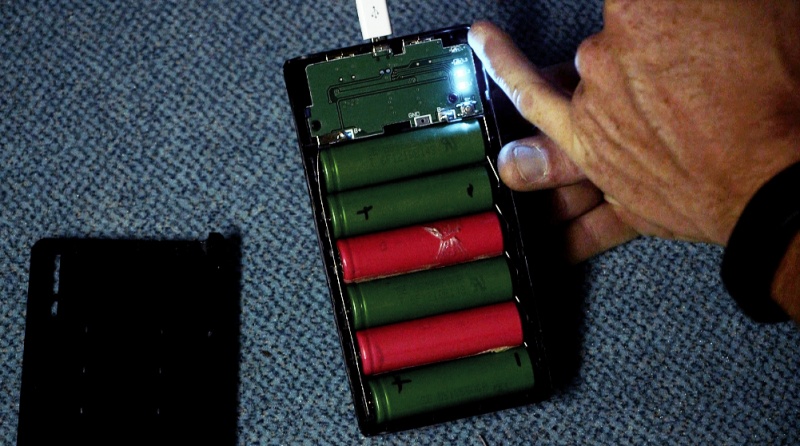 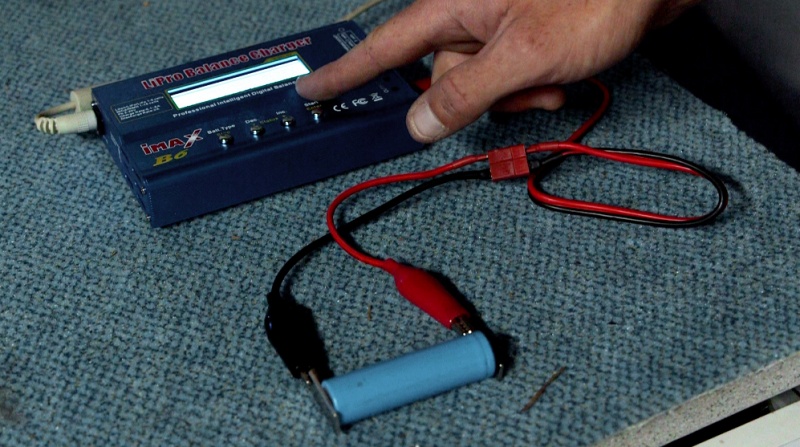 Step 5 - Fabrication of the 3 different modules

1) Use a black and a red wire, use a wire cutter to remove sleeving from the wires.

The charge regulator has 2 inputs : IN- and IN+ (which are indicated on the component).

1) Tape the two cells together for easier soldering

2) Take 2 wires, one red and one black, remove sleeving on their tips on a few centimeters

3) Soldering the 2 cells in parallel : black wire to the negative poles of each cell and red wire on the positive pole of each cell. (image 6)

Caution: Isolate the welds (e.g. with tape) to avoid short-circuits .

The voltage regulator has 2 inputs and 2 outputs:

The LED has two input wires : one positive and one negative. 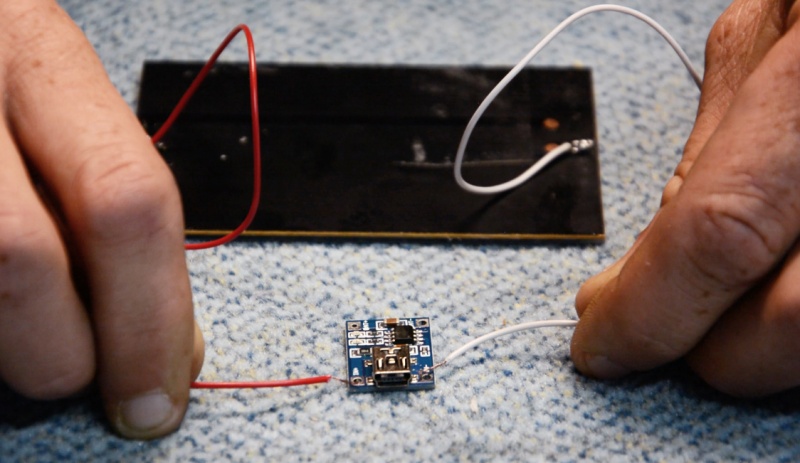 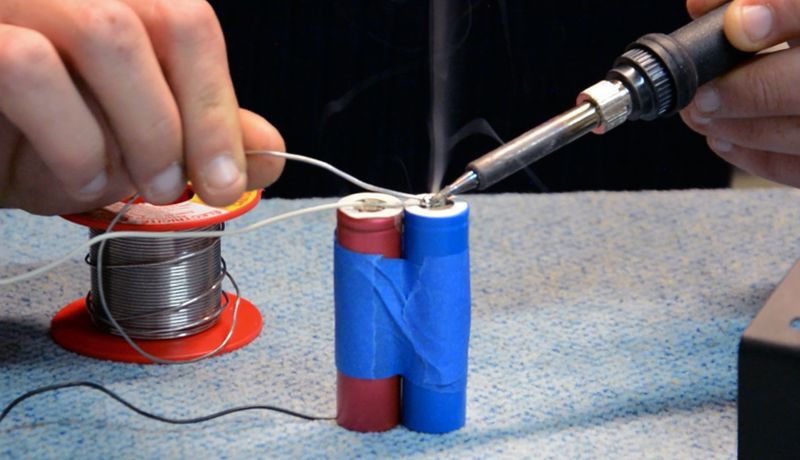 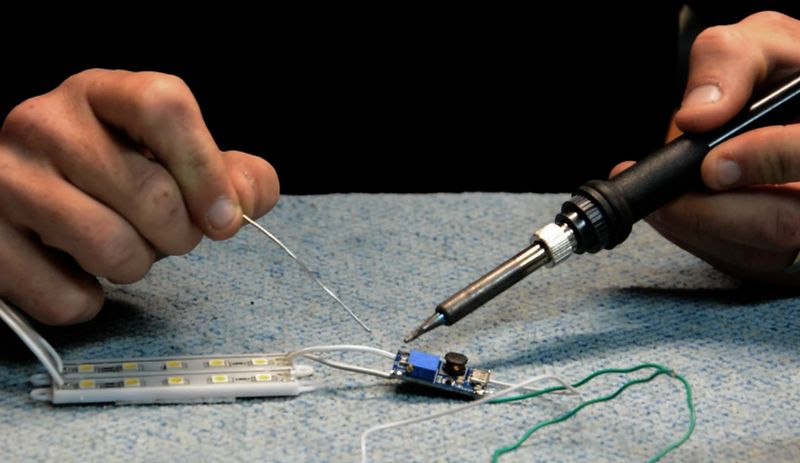 Step 6 - Connection of the 3 modules

1) Connect negative cables from the battery and the converter, by twisting the wires together

2) Weld the whole to the negative pole of the regulator.

3) Repeat the same action with the positive cables of the converter and the battery, then weld the whole to the positive pole of the charge regulator. (image 8)

Note: The circuit is now closed and the light is shining.

4) Cut the positive wire connecting the regulator to the converter in order to open the circuit. We will later add the switch in series. It will be used to open and close the circuit. 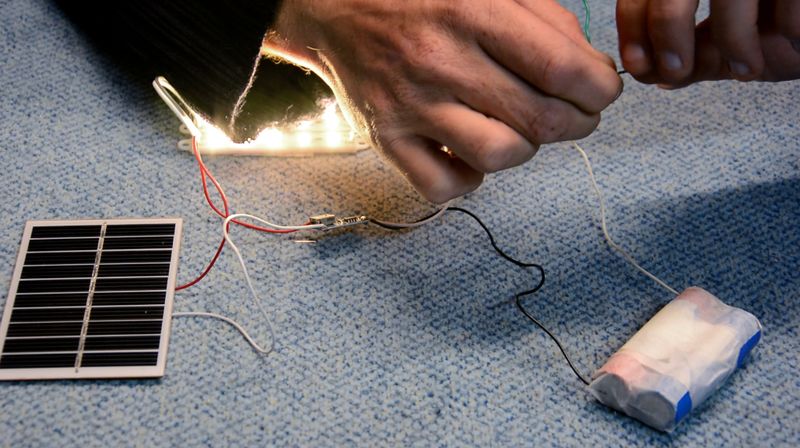 1) Use a box the size of your solar panel and about 5cm deep.

2) Keep only the sides of the box, remove top and bottom.

3) Pierce a hole on one side of the box to insert the switch. (image 9)

4) Pierce a second hole slightly above the place of the solar panel, in order to insert the USB output of the charge regulator. 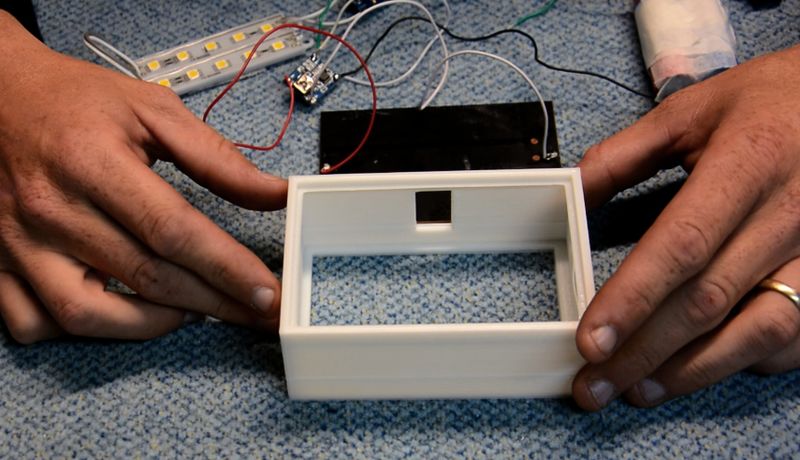 Step 8 - Fitting the modules in the box

2) Fit the light switch in its place

3) Weld the two tips of the positive cables from the capacitor to the switch.

4) Stick the charge regulator to the box with a glue gun, USB face towards its dedicated slot.

5) Stick the battery to the solar panel, stick the LED to the battery, then stick the capacitor to one of the inside faces of the box.

6) Tuck in all the wires and add the light diffuser last.

All elements are installed inside the box (image 11)

7) Switch on the switch to check everything is working. 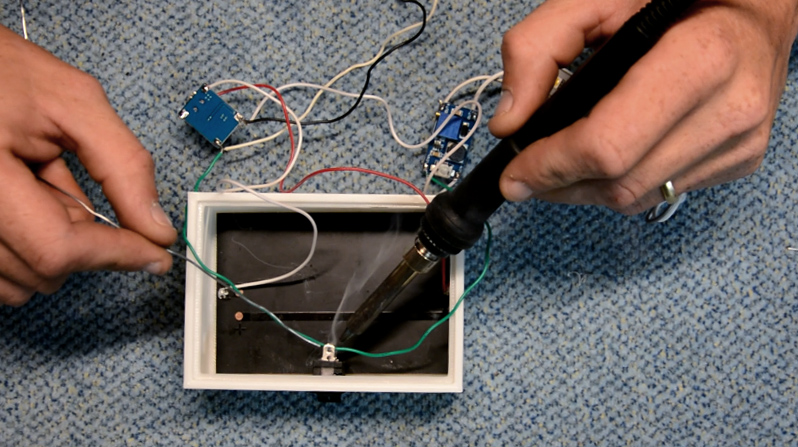 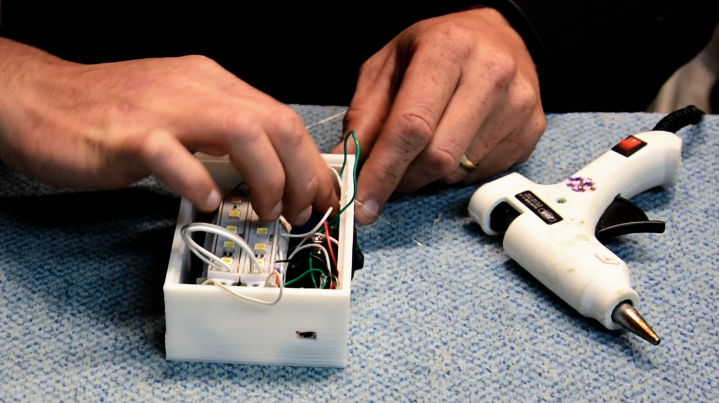 Recharge your battery in the sun during the day. Turn on the light at night.

E.g. in Senegal for doing homework at night, in Morocco to keep one's shop open as long as the neighbour's who has electricity, in the desert, in transhumance...

Low-tech Lab team gently invites you to check the Biblilowtech.